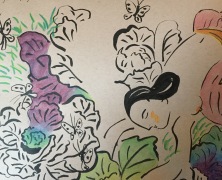 Ten years ago I bought a set of stationery cards called Goddesses. A set of twelve with four each attributed to a season. It never occurred to me to think beyond my writing desk and its curated pleasures to Mayumi Oda as a fine artist, or I would have known more about her significant contribution […] 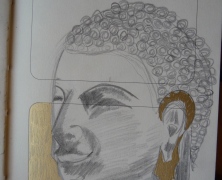 Last night at the harried free Friday museum crawl I got two quick sketches before leaving to catch a former colleague’s band at 8:00 – except that it’s at 8:00 today. The buddha cracks me up because the mouth is small and tight under the nose – as if he too can smell my last […]

OMSI on the last Saturday before school restarts and before the Sherlock Holmes special exhibit closes? Madhouse. The Drink and Draw group met, but tickets were no longer available for Sherlock so we went our different ways in the free areas and outside, and later regrouped at Hair of the Dog Brewery to review sketches […]