Home » In My Head

Category Archives: In My Head 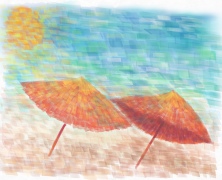 This image, and the app in which I created it, are both products of my trip to Croatia. I have never seen a higher concentration of swimsuit shops in such close proximity. This was true of each of the four cities I visited: Zagreb, Zadar, Split, and Dubrovnik. When your country has over 1,000 miles […]

“Whatever you can do, or dream you can do, begin it. Boldness has genius, power, and magic in it. Begin it now.”  Before this quote was on every greeting card and coffee mug this side of 1995, and generally considered not to be from Goethe, it was a little  photocopy in a locket that I […]

Everything about this effort was backwards. It began with lazily copying a flower motif from a throw pillow onto craft paper in my sketchbook: low effort, low attachment. I counterintuitively added the cat after and behind the flowers.  I then began my descent into art supply free fall. Darkening it with peerless water colors, then […] 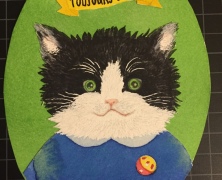 Actually, from Blockhead to Bruiser. Creating fluffy kitten fur has a learning curve. As I continued ever-outward with my dry brush, this kindergarten cat’s head swelled to Sponge Bob proportions. I couldn’t let it go. X-treme fur required an X-acto solution – one more anxious point-of-no-return in art-project land. Cutting and pasting, I felt good about this […]

“Why did I stick that whale to that lady?” The Independent Publisher’s Resource Center (IPRC) hosts a monthly event Open Collage Night, where one has the opportunity to reflect on such decisions. I don’t remember ever doing collage, but suspect that somewhere between Kindergarten and twelfth grade, maybe lightly attached to intermittent Sunday school attendance, […]

Di-gi-tal … Di-gi-tal. I wanna get di-gi-tal… R.I.P Olivia Newton John. It kind of pains me to see that a month has gone by. I really wanted to finish my Ghost Girl for Halloween. Instead, I re-investigated a drawing app I got … three years ago? After many unexplored updates and a PDF instruction sheet, […] 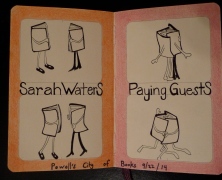 Monday at Powell’s, Lidia Yuknavitch interviewed Sarah Waters and could BARELY contain her passion for Waters’ new book The Paying Guests – it was entertaining! I got there about thirty minutes early and awkwardly sat in some very poorly arranged chairs that (practically by design) made it impossible to see the guests speak or read.  After it […]

I guess that only makes sense if words are fish. But something is being intercepted between aural and neural signals – even if meaning and understanding are microseconds away from the initial slip of the ear. This happens often, although my hearing is supposedly fine. I found this instance amusing and tried to capture it. […]

The last time I cooked tilapia in my small apartment, I was firm in my resolve to eat fish in restaurants. Yet, time passes, memories fade. The tilapia was bad, but this little bastard (only $2.95 -wild caught!) is violating every porous surface in my house. It won’t go away. I challenged it with slabs of slow-cooked bacon, […]