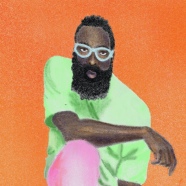 What is the likelihood that the first title that pops into your head, you’ve already used? How many Rocket Man posts can I create? James Harden of the Houston Rockets may be more deserving of the title from a literal POV, but I sketched the rocket of another James – James Todd Rouse – at PNCA’s open house first. James-n-Rockets two-fers.

I’m not a big sports fan, but when I started watching basketball, James’ sculpted hipster beard felt right at home in a Portland living room. He stood out to me. For my recent long flight to Croatia, I picked up GQ, (when I travel I grab magazines I don’t normally read) which featured James on the cover in a vivid floral explosion reminiscent of 80’s patterns. James began on the plane and ended four weeks later after a series of lunch hours and too-early insomnia wake-ups featuring tea and a cat using mind control techniques to make me serve her breakfast one or two hours early.

I’m still iPad infatuated! It’s freeing to have almost any tool you might want wherever you are. It makes my backpack feel like an art-supply version of Hermione Granger’s Undetectable Extension Charm purse and I am In. To. It. It’s also freeing. I feel able to throw on a layer, experiment and dump it if I don’t like it. That said, I did all of James himself old school – in just one layer using the bonobo chalk tool and a #6 technical pencil for small details.

But I did have layer-learnings: my automatic white background lent an opacity that wasn’t really there. So when I added a gradated orange background underneath the James layer, it showed through a lot and of course turned all white areas to orange.

I later realized it would’ve been more efficient to add a new layer below James, deselect his layer, then trace over his image to just get his silhouette, but that’s the fun of discovering Procreate and digital painting. ❤️❤️❤️