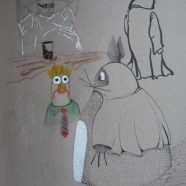 Posted by moonminded on January 29, 2014 in Urban Sketchers | Leave a comment

This was a happy people weekend. Urban Sketchers met at the Convention Center for Comicon and a Chocolate Fest running simultaneously. There is something magical (for real) when someone walks toward you in full costume regalia, you really appreciate the effort and commitment, give a huge smile that they unmistakably read as appreciation, and then they smile back accordingly as kids intervene get pictures. I also tried drawing at The Lovecraft – if you’re going to draw arcane seals and skulls, turn on the light. If you can’t, listen to the music. It was my once a year Cure cover band outing, but this time was a new inaugural Cure effort – classical- This Twilight Orchestra. Was there ever a band more suited for adaptation to harp, viola, guitar and weird sonorous devices? I made a point of telling the viola player how perfect it was and she beamed through her goth eye make up that it was “like a dream coming true for her”.  A Cure fan that happy is happy enough for me.